Empress of Ireland and the Hart Family of Mortlach

The Hart Family of Mortlach, Saskatchewan

Empress of Ireland departed Quebec City for Liverpool at 16:30 local time (EST) on 28 May 1914 with 1,477 passengers and crew. Henry George Kendall had just been promoted to her captain at the beginning of the month, and it was his first trip down the St. Lawrence River in command of her.

The ship reached Pointe-au-Père, Quebec (or Father Point) near the town of Rimouski in the early hours of 29 May 1914, where the pilot disembarked. Empress of Ireland resumed a normal outward bound course of about N76E, and soon sighted the masthead lights of Storstad, a Norwegian collier, on her starboard bow at several miles distant. Likewise, Storstad, abreast of Métis Point and on a course W. by S., sighted Empress of Ireland's masthead lights. The first sightings were made in clear weather conditions, but fog soon enveloped the ships. The ships resorted to repeated use of their fog whistles. At about 02:00 local time Storstad crashed into Empress of Ireland's starboard side. Storstad remained afloat, but Empress of Ireland was severely damaged and began flooding. 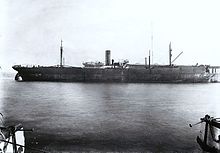 SS Storstad in Montreal after the collision. Note the damage to the bow

Empress of Ireland listed rapidly to starboard. There was no time to shut the watertight doors. Most of the passengers and crew in the lower decks drowned quickly; water entered through open portholes, some only a few feet above the water line, and inundated passageways and cabins. Those berthed in the upper decks were awoken by the collision, and immediately boarded lifeboats on the boat deck. Within a few minutes of the collision, the list was so severe that the port lifeboats could not be launched. Five starboard lifeboats successfully launched, while a sixth capsized during lowering.[18]

Ten or eleven minutes after the collision, Empress of Ireland lurched violently on her starboard side, allowing as many as 700 passengers and crew to crawl out of the portholes and decks onto her port side. The ship lay on her side for a minute or two, having seemingly run aground. A few minutes later, about 14 minutes after the collision, the stern rose briefly out of the water and the ship finally sank. Hundreds of people were thrown into the near-freezing water. The disaster resulted in the deaths of 1,012 people.

As reported in the newspapers at the time, there was much confusion as to the cause of the collision with both parties claiming the other was at fault.[19] "If the testimony of both captains were to be believed, the collision happened as both vessels were stationary with their engines stopped," as noted at the subsequent inquiry. The witnesses from Storstad said they were approaching so as to pass red to red (port to port) while those from Empress of Ireland said they were approaching so as to pass green to green (starboard to starboard), but "the stories are irreconcilable".[20]

Ultimately, the swift sinking and immense loss of life can be attributed to three factors: the location in which Storstad made contact, failure to close Empress of Ireland's watertight doors, and longitudinal bulkheads that exacerbated the list by inhibiting cross flooding. A contributing factor were open portholes. Surviving passengers and crew testified that some upper portholes were left open for ventilation.[21] The maritime 'Safety of Life at Sea' regulations require openable portholes to be closed and locked before leaving port,[22] but portholes were often left open in sheltered waters like the St. Lawrence River where heavy seas were not expected. When Empress of Ireland began to list to starboard, water poured through the open portholes further increasing flooding.

A young Mortlach family was aboard the Empress when it sank: William Hart, 29, cattle buyer butcher and farmer; his wife, the former Emma Roach 23, of Limerick, Sask., and their two children Edith 4 and William 18 months.

The Hart family from Mortlach as well as another man John Scott from Mortlach were lost when the Empress sank. Only the body of four year old Edith was recovered, washed up on shore some 18 miles downstream from the site of the sinking. For days the identity of the body was in question but her grandfather Roach, who had traveled from Quebec to try to find his family, was able to make a positive identification. Little Edith is buried in Mortlach Cemetery.

More History of Mortlach
Powered by